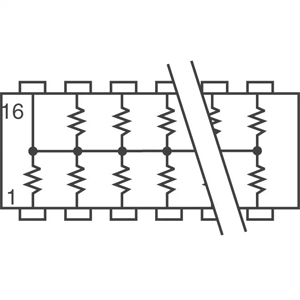 Something that is new to me is the Data General Burst Multiplexor Channel (BMC) bus. When I used a Nova 3 and Eclipse S140 the BMC bus did not exist. As far as I can tell this was introduced with the advent of the MV/8000 (Eagle).

The BMC bus allows PCB’s to transfer data direct to memory at a vastly increased speed when compared to the backplane bus. It is connected using 40pin IDC sockets on the CPU and BMC controllers (J1 and J4 in a daisy chain fashion). The last controller PCB requiring a ‘BMC Terminator’ in J2 according to DG documentation. As my MV/9800 was missing its internal cabling I did not have a terminator so I set out to see if I could find out more.

The SCSI II manual provides a pin out for the J2 terminator showing various signal lines and 6 x 3v sources. So to me it looked like the pins carrying signals needed to be pulled up (as they are inverted signals) using a resistor arrays and the 3v supply. All of the ‘Terminators’ I have come across in my time worked in this way either pulling up or pulling down – what I didn’t know was (but would have ultimately took a stab at) was the resistor value for the BMC terminator.

I corresponded with VIP Lothar who has some 3rd party controllers that utilised BMC and he told me the 3rd party ‘terminators’ actually were just short circuits all of the pins together. I thought this a little odd, why would you short all of your data lines together? Then a week or so later another VIP suggested the same so I got the DVM out and had a close look at J2 on the controller. It turns out that there are very few connections on J2, most of the pins labelled as data on J2 (Table A3 below) are not connected. Interestingly 6 or so pins on J2 all go to pin 16 of a resistor array. So the shorting bar across all 40 pins makes sense, it’s simply supplying power the resistor array on the PCB and it it these arrays that provide the termination.

Here is my finished ‘Terminator’ a repurposed 40 pin IDC terminator I found in my bits and bobs store: